October is a just few weeks away which means it's almost time for the 2012 Countdown to Halloween. For 31 days, starting on October 1st, I will post 31 videos of rare and not so rare Halloween-related cartoons, shows, specials and movies! Be sure to check it out, It's gonna be fun.

To see all the other great blogs that are also participating in the countdown, click on the badge below or go to CountdownToHalloween.com. 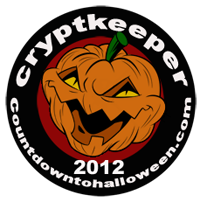 No comments:
Labels: 2012 Countdown To Halloween

In this episode of the 1966-1968 series The Monkees, Mike, Micky and Peter attempt to rescue Davy, who is being held in the basement of a creepy castle by Dracula, Wolfman, Mummy and Frankenstein's monster. This originally aired in January 1968 but I loved watching the show when it aired on MTV and Nickelodeon in the 1980's. This was one of my favorite episodes.


Her is a music video of the song Monster Mash that uses spooky footage from the Monkees TV show: