A few good jokes and a lot of lame ones. Basically just a quick rehash of familiar horror tropes but at the length of just 70 minutes it's easy to sit through. There are no English subtitles in case you want to watch. Here is the badly translated to English synopsis: Four teenagers on their way to a Halloween party crash their car in the woods. A man with a chainsaw emerges from the darkness who turns out to be a good-natured hostel owner Harry, inviting them to follow him. Combine this scenario with two slutty sluts named Paris and Fikki, a hockey-mask wearing mass murderer who has escaped from jail, an annoying doll in a small red car who demands popcorn, dancing zombies summoned from the book of the dead, and you have "Halloween, on a Friday the 13th and 28 weeks later ..."

Because of the privacy settings, I could not embed the video here. Click the pic below to watch on Vimeo.com: 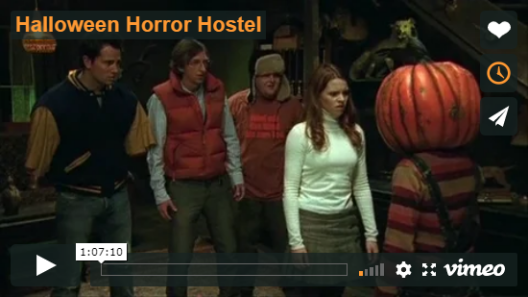